Maple syrup is only available to purchase during February and March.  Contact us if you want to try some, or reserve some for next winter!  $10 per 8 ounce bottle, while supplies last!

During the long, cold winter of 2015, we made our first attempt at homemade maple syrup.  We have fine-tuned the process a lot since then; this post explains how it all started!

Click here to learn more about the health benefits of pure maple syrup! 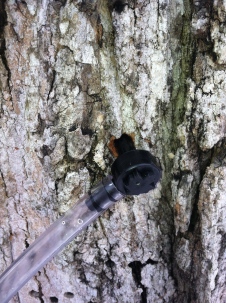 We got the idea to try this from a KY forestry person who walked our land with us in order to find out if we had any marketable timber.  After coming across a few giant sugar maples and tons of box elders (a version of maple which is also capable of being tapped) we thought it may be a fun thing to try during the winter.  We purchased taps from Amazon.com: Maple Sap Spile, 5/16″ Ecolo Spout  Since the sugar maple trees are so large (over 25 inches in diameter) we put in 3 taps, above the largest roots, and ran the tubes together into a 5 gallon bucket.

More facts about collecting and producing maple syrup HERE! The first time we collected sap we got about 8 gallons, a little less, in roughly 2 weeks and kept it frozen until we were ready to boil it down.  To start this process, we used a propane stove like this one, and a 3 gallon stainless steel pot, set up in the driveway.  Once the sap was brought up to a boil we had to ladel the additional sap in slowly to maintain a boil.  This was a tedious process, so we added a grill grate on top of the pot so that we could heat up each subsequent jug of sap before pouring it in.  The initial process took about 5 hours…. slowly but surly the sap started changing color and putting off a nice maple scent.  Once we had boiled the ~8 gallons of sap down to about 1 gallon, we brought it inside to finish it off on the stove.  With a candy thermometer, we brought the sap to about 7 degrees above the boiling point here in central KY (210 degrees).  The syrup was foaming/bubbling and slow-flowing so we knew it was about ready (according to what we read on the internet)! 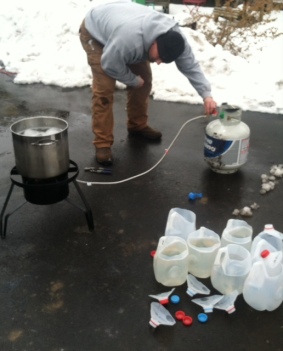 Click here to redirect to our YouTube channel to see a short video of the sap boiling in process!

After our first “extraction” attempt and a little more research, we decided to try the freeze/thaw method to separate some of the water from the sugar before the initial boil. We also bought a 6″ deep stainless steel pan like this one to hold more liquid and hopefully boil faster!

On Monday, March 3, 2015 we boiled for the second time using the above method.  We started with 11 gallons of sap out of the trees and let it freeze and then thaw… during the thawing process, the highest concentration of sugar thaws first so we separated the first 6 gallons of sugar water to thaw out and threw the rest away (science tells us this was mostly water, anyway).  So, we started the boiling process with 6 gallons again, but this time it was a higher concentration of sugar.  Total cook time was about 4.5 hours from start to finish (1.5 hours faster than last time!)  Plus, we finished with 48 ounces of grade A light amber syrup, proving our sap WAS a much higher concentration of sugar!

Fast forward…. we now have a homemade maple syrup extractor built out of a 55 gal metal drum and some chimney stack.  Now, our fuel costs are ZERO.  2018, year four, we were able to tap more trees and have our best season yet!  We are continuing to make the process more efficient and more profitable for our farm. 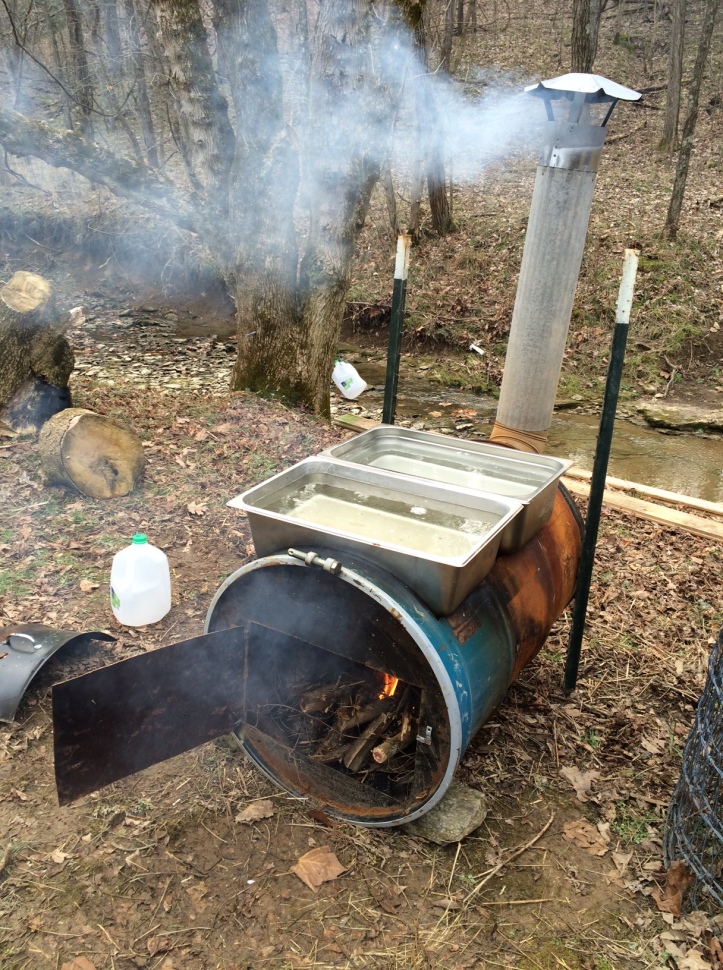 Contact us if you are interested in purchasing an 8 oz bottle of 100% pure maple syrup for $8 – while supplies last! 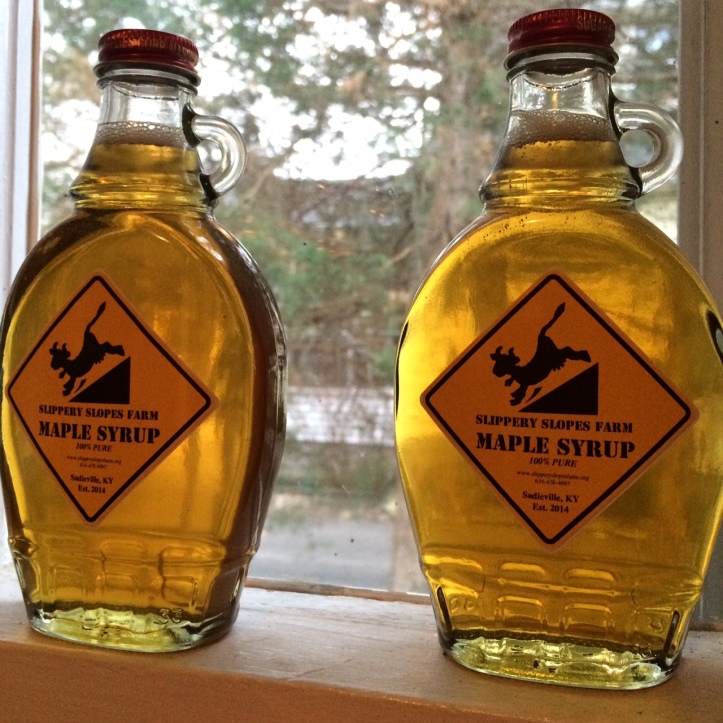 What are you looking for?

Find us on social media: