When we bought our little farm in late summer 2014, we bought a tractor, too (an obvious purchase for a farm).  So, our first big project was housing said tractor in some sort of structure to keep it out of the elements.  Farm meets barn.  Almost two years later and we are about to wrap up the barn build.  Take a look at some of the pictures of the process.  We are proud to say that most of the materials used on the build are reclaimed, recycled, dumpster finds, and/or gifted from farmin’ friends who had left overs.  Hence the length of time it took from conception to completion… and half our time was spent gathering materials and trying to get them down the slippery slope! 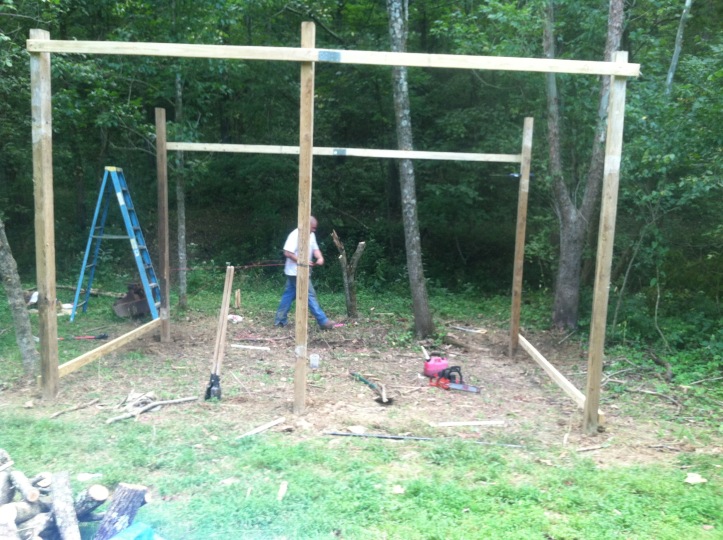 Step one:  setting the 4×6 posts given to us from our friend the horse farmer, Mr. Bert.  We are not very mathematically inclined and had a pretty difficult time getting this thing square.  (Not gonna lie, I finally just eye-balled it).  The first structure is about 12×16 and big enough for our tractor and a few other things…. little did we know this barn would more than double in size by the end!

Toby the Tractor living in his new home, still under a tarp until the roof goes up!  It’s September 2014. 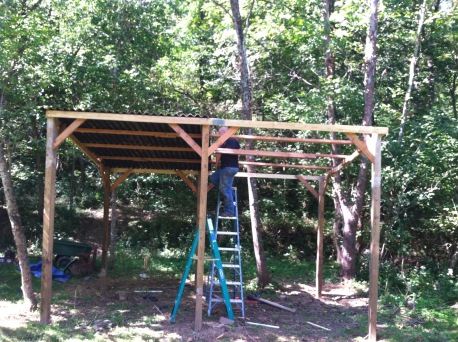 By October, we have added a roof with a gutter and a water collection system…. 275 gallons.  By the end of the month we collected all 275 gallons of rain water then proceeded to empty it and reinforce the tank to give it structure… as you can see above it collapsed under the weight of the water.

In February of 2015, our barn suffered another set back – a foot of snow!  Not to mention all 275 gallons of water is frozen solid in the tank.  It happens.  However, we were happy to discover that our tank structure held up to the pressure just fine. 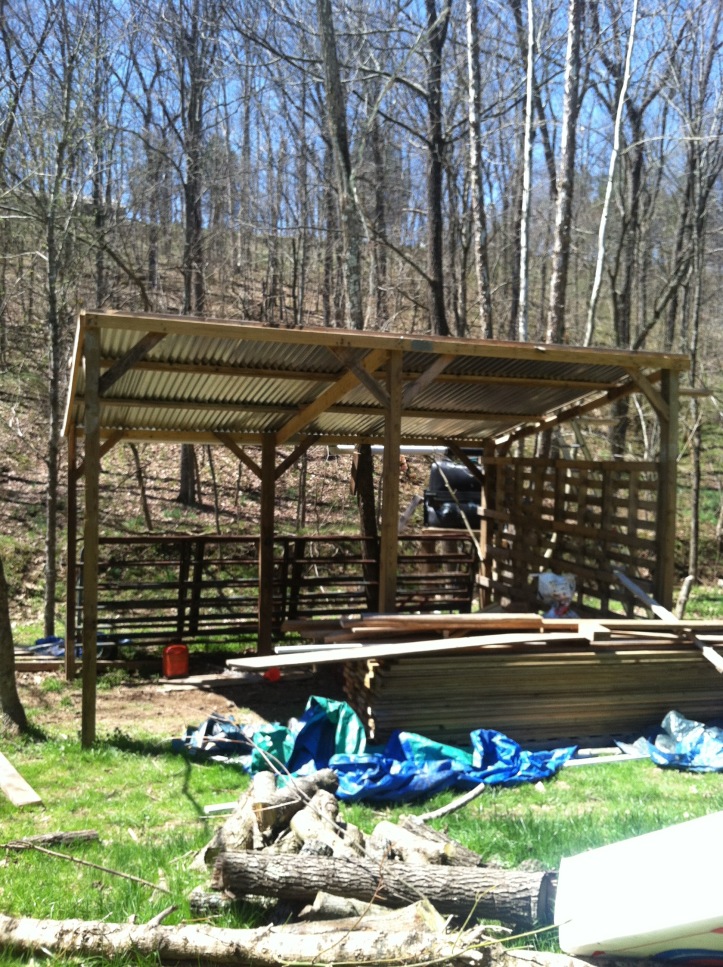 Spring 2015, we installed a new roof!  The only thing we bought new for the barn is approximately 200 sq foot of corrugated metal roofing (for this section) and a new 12′ 2×6 center beam.  We also accumulated more materials to use for future projects… which occupied us all summer. 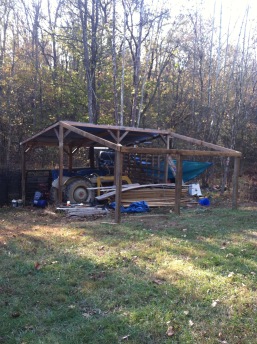 Fall 2015, the barn grows!  12×16 becomes 24×16 (don’t worry, we aren’t done!)  The roof metal on the expansion came from an old barn off Hwy 460 toward Frankfort KY.  We bought it for a few dollars a sheet from a German man out of WV who does barn deconstruction projects on commission.  Good fella to know. 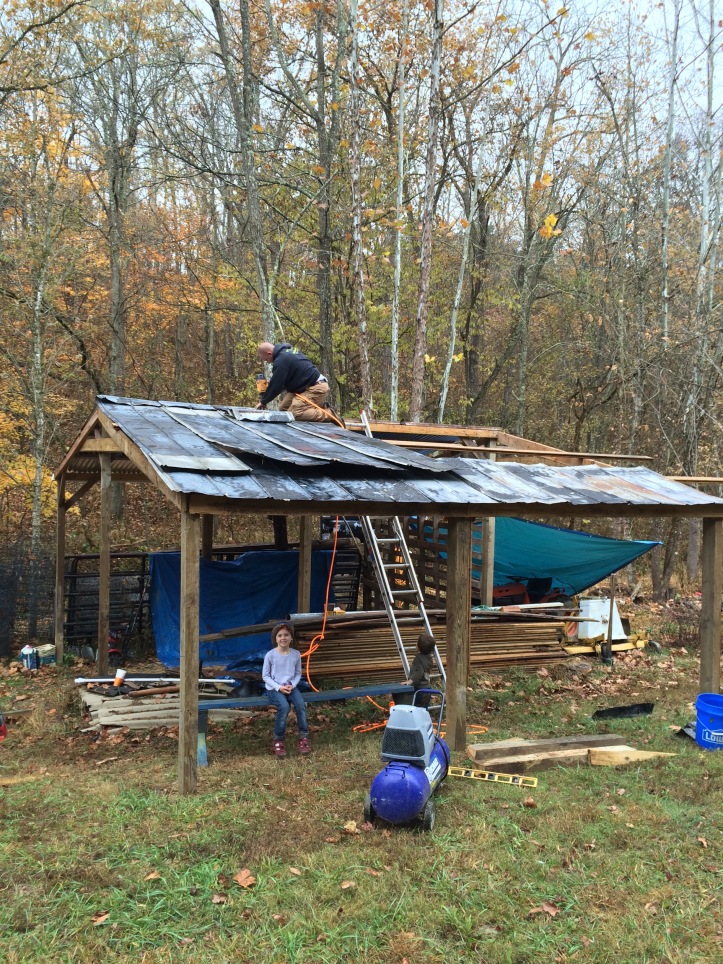 I love the look of the old barn roof!  I would replace the new stuff with this if I could. 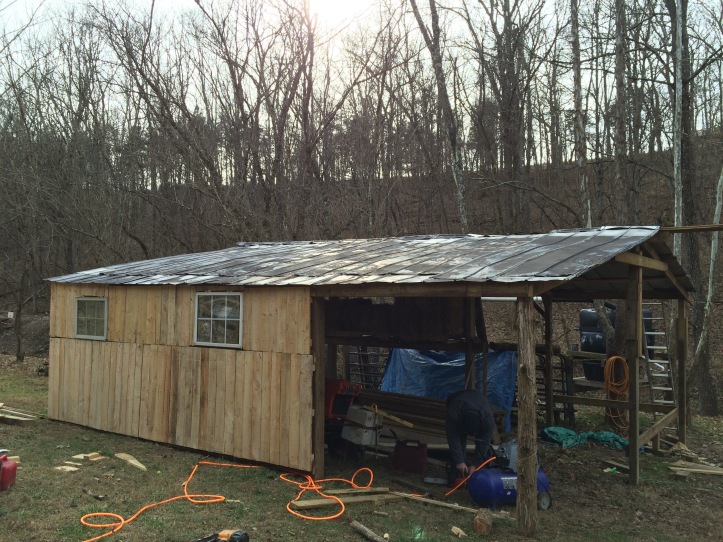 Winter 2015/2016… winters in Kentucky are strange.  It was 70 degrees on Christmas Eve so there are a lot of winter weeks spent farmin’!  Here you can see the third and final (hopefully) barn expansion complete with roofing and some siding.  The barn is now 24′ wide and 36′ long.  We ran out of 4×6 posts so we used a cedar tree for this back corner.  I love the look of cedar posts so we are going to leave this back corner un-walled, sort of like a “porch”.  Yes, our barn is so fancy it has a porch.  It also has windows… $5 apiece from Habitat for Humanity ReStore.  The siding was a pleasant surprise… we pick it up free from a company in downtown Georgetown. 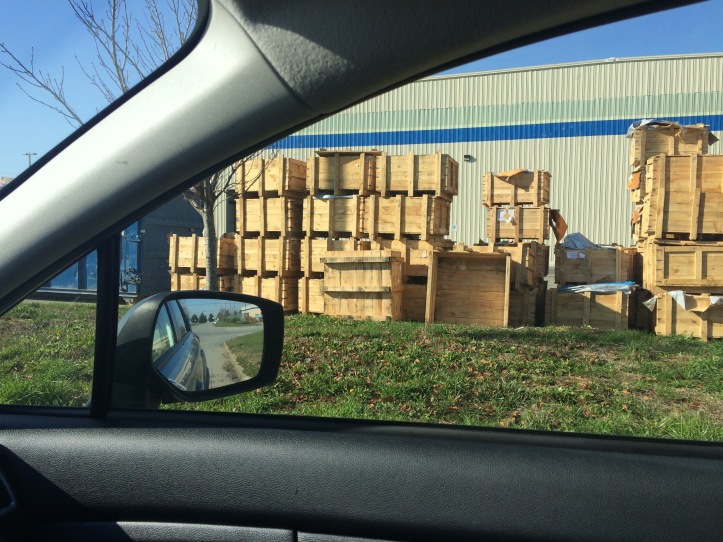 This is the barn siding before it knew it was barn siding!  I love to re-purpose materials!  It is NOT stealing if you do it in broad daylight.  And workers walk by and say hello.  And some of the boxes came out of a dumpster (to the left in the picture).  Just act natural…

We even built a loft inside to store hay and children. But mostly hay.

The front of our barn is getting gates (also a gift from Bert) and my little contribution other than acting as fore(wo)man is the flag made from a pallet…. you have seen the traditional barn quilt paintings?  The flag is our version of that. 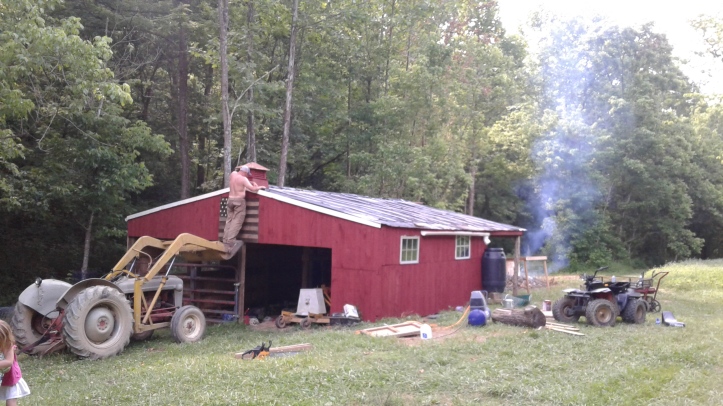 And here is a finished picture, complete with paint and a cupola!  The painting technically didn’t get finished until late summer of 2017.  That is a three-year-long build, folks!

We had a lot of fun with this project – on to the next!

What are you looking for?

Find us on social media: